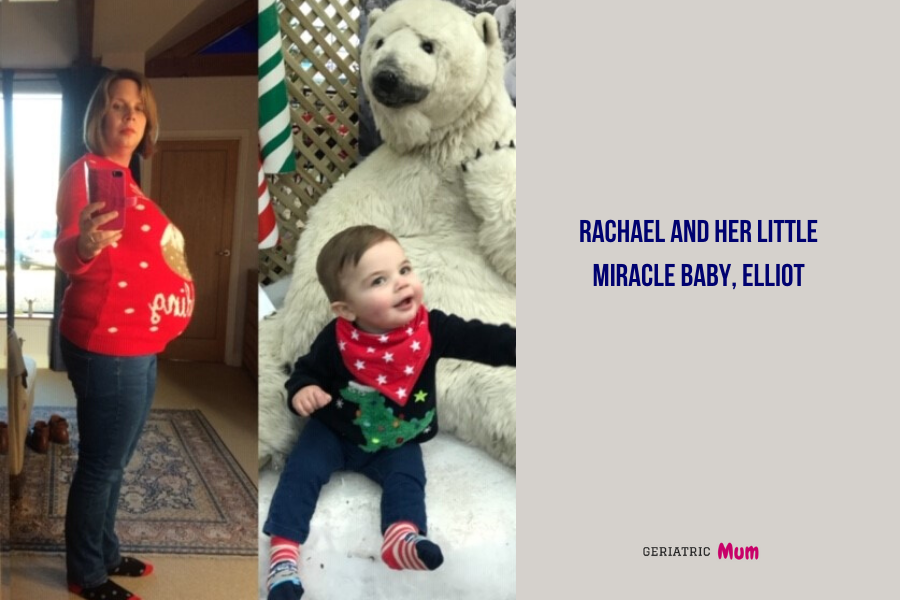 Rachael is an inspiration. After being diagnosed with breast cancer at 36, she went on to have her baby boy, Elliot at 42. Read all about Rachael and her story below, and her fab realisation at the end of the piece.

What is your current age?

At what age did you have your first baby?

At what age did you have your last baby?

How did people react when you told them you were pregnant with your over 40 baby?

People were pleased. He was my first and he was my miracle post-cancer baby. I was child-free when I was diagnosed with breast cancer aged 36, and it is one of those things that women of that age don’t think will happen to them – but it does. My  first thought when I was diagnosed with breast cancer was “Can I still have children?”.  My breast care nurse was fantastic and, encouragingly, she told me to leave it with her. Three days after our conversation, I had an appointment at a fertility clinic. Many people don’t realise that chemotherapy can make you infertile – so freezing eggs / embryos is potentially an option for women who want to try and have a baby. I ended up freezing 7 embryos.

After active, hospital-based treatment, I was put on hormone therapy for two years – this is prescribed to reduce the risk of recurrence as much as possible. After the two years had passed, my Oncologist gave us the okay to try for a family.  We wanted to try to get pregnant naturally first, but after three months of trying, with no success, we decided to go ahead and use our frozen embryos. I had two rounds of IVF, both with the embryos that we had had frozen. Sadly, the first round didn’t produce a successful outcome – I did fall pregnant, but at my seven-week viability scan, they could see a heartbeat, but it was measuring small. A week later, I went for a follow up scan, and there was no heartbeat – I’d had a missed miscarriage. For round two, I had three frozen embryos left but only two survived being thawed. We decided to transfer both and hope that at least one was viable. Amazingly, one survived and was implanted, resulting in my little boy, Elliot. He is a two-year-old bundle of energy, and although things can be exhausting at times, I would not change them for the world. Without that final attempt at IVF, we wouldn’t have had children.

Were you offered any memorable words of wisdom when you spoke to others (friends, family, midwife, doc) about your pregnancy?

Not really no. I think they knew I just wanted him here safe and sound. They knew how much this meant to me and everyone was there for me to give me support. I was on blood thinners during the pregnancy and was also diagnosed with gestational diabetes, so my medical team kept a close eye on me. I didn’t mind at all, I found it reassuring rather than intrusive that I was being closely monitored and cared for. My midwife was brilliant – I felt comforted that she fully understood my situation. As a result of breast cancer, I only have one boob, and during my pregnancy I found myself stressing about breastfeeding – but my midwife reassured me it was possible. Sadly, after Elliot was born, I did not produce any breast milk, so we bottle fed him – but we tried.

Describe how it felt to be an older (geriatric) mum?

I felt isolated. During my pregnancy I went to NCT classes, and whilst I met some lovely people, in all honesty I was scared witless. I had no birth plan (I didn’t want one) and I just wanted my baby here safely. In addition, I was so used to being independent, and the thought of such a huge change in lifestyle was quite daunting.

Before I was diagnosed with cancer I was a bit of a workaholic. Ironically I was working in research and development – on oncology clinical trials for a pharmaceutical company and was working on a breast cancer drug at the time. I was busy and focused, and being a mum wasn’t something that I had in my life plan. When I met my current partner, I knew that I wanted a family. When I was diagnosed and during my treatment, my breast cancer gave me a huge reality check. I’d faced my own mortality. I’d understood, pretty much overnight, that I wasn’t invincible and my illness had helped me to recognise what was important to me. When I was diagnosed, one of my first thoughts was, “What if I die and I’ve never been a mum? What if I die having never experienced childbirth or parenthood?” Those questions are the harsh reality of a cancer diagnosis as a woman.

I won’t have any more children, Elliot is our one and only. I am taking Tamoxifen (my hormone medication) and will be for the foreseeable future. I’m disappointed that Elliott won’t have a sibling, but feel so lucky that he is in our lives. He is loved beyond words, he is our little miracle.

Is your child in school yet? and if so, how do the other mums and teachers react?

No – he is at a fab nursery which he loves and has lots of little friends there. And no-one has referred to me as grandma! (yet).

Please write here about anything you think fellow geriatric mums would love to read about; advice, coping mechanisms, exercise beauty, body, pelvic floor or anything humorous or helpful.

Oh – I am happy to talk about my IVF/ breast cancer experience – ask away! Plus, I now know that being an older mum doesn’t mean your life goes on hold – it just changes. My biggest learning was not comparing my child to others – he did everything in his own time. Initially, I invested too much energy and worry in why he wasn’t doing things as fast as other children, rather than enjoying being in the moment. I’ve learned now that he is perfect as he is, and will do things at his own pace.

What an inspiring lady – Rachael you totally rock!