Have you ever been to a magic show? I’ve seen magic performed at weddings or work dos, usually by a guy wearing a dinner jacket, and I must say I’ve never felt comfortable with it. I’ve always felt like I had to say the “wows” and “no ways!” in all the right places and it felt a bit spotlight-on-the-magic-recipient type stuff. Up until last night that was my only experience of magic. Like many of you reading this, I had seen people being chopped in half on TV using one of those spinny round tables which always made me ask the same question to whomever I was with “How DO they do that?”. I’ve never cheated and looked on YouTube and still won’t – because magic is magic, isn’t it?

Yesterday, my girls and I went into London’s West End to see Wonderville at the Palace Theatre, Shaftesbury Avenue. It was Gala night. We got the train in the afternoon, jumped into a taxi from St Pancras station to Leicester Square, spent silly money in the M&M store on chocolate, went for an early dinner and then wandered past china town towards to the theatre. We crossed the road towards the Palace Theatre and I noticed that Harry Potter was featured across the front of the theatre (were we in the right place?) and I also noticed that there were crowds of people, photographers, a red carpet with beautiful looking people on it, and just like magic we all said in unison “are we in the right place?” We were.

During our five min queue and whilst having our bags and tickets checked, the girls were clutching to my side – I don’t think they’ve experienced anything like it before.  Inside the theatre the atmosphere was electric – this sounds a bit of a cliche, but I sensed a magic in the air.  On the way to our seats, my youngest daughter was handed a brochure, the look on her faced matched one of the excitement kids express on Christmas morning, it was so wonderful to witness. My eldest daughter spotted one of the stars of the show (featured on the brochure) sitting directly behind us and she kept whispering “mummmm, one of the stars is behind us!”. Both girls had that feeling of excitement you only seem to have when you are a kid, I remember it so well, and actually, despite being 45, I too had that feeling last night.

The theatre, if you don’t know it, is beautiful. Ornate, dark, traditional and it has many tiers that seemed to go up forever. The girls were amazed. The crowd was a mix of couples, families, fellow theatre goers, some people from the press and the vibe in the room was gorgeous – it was one of unity and delight. 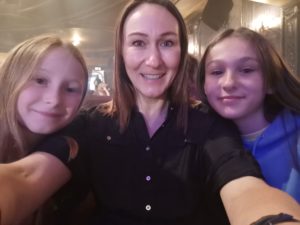 Mask off briefly for a pre-show selfie!

The show (around 2-hours) was truly remarkable. I am not usually a fan of magic, as I said above, but this wasn’t any old magic. It was pure wonderment and entertainment – paced beautifully so that the brain could keep up. The acts, oh myyyy, the acts, were just.so.good. We spoke afterwards about our favourite performance and I can honestly say I didn’t have any one in particular – the balance and creativity of all on stage was nothing short of mind-blowing.

In no particular order, we were dazzled by: Chris Cox, Young & Strange, Kat Hudson, Josephine Lee, Amazi, Edward Hilsum and a wonderful team of assistants, dancers and stage hands. It was slick, professional and as I keep saying; ENTERTAINING. Amongst masses of other tricks, we witnessed Edward Hilsum making doves and little red balls appear from nowhere, cleverly executed mind-reading work with members of the audience by Chris Cox (he guessed someone’s occupation, home address, fave food and more!), an audience participation calculator trick by Kat Hudson which I cannot begin to think how she made work, some excellent eye-wateringly painful-looking illusions by Josephine Lee, laugh-out-loud moments from Young & Strange coupled with some highly skilled illusionary, gracefully controlled hula-hooping by the unique and stylish Amazi that made me realise how powerful her mind and body must be.

The set and costumes were spot on, too. We had fireworks, fire, smoke, glitz and glam which made our Monday even more special.

I don’t think I looked away for any more than five-seconds during the entire show, the only time being when I did an OMG look (from behind my mask) towards one of my daughters.

I would recommend this show to anyone and everyone. Truly. The talent on stage last night was exceptional and the vibe in the theatre was wholesome and inviting.  We haven’t had much in the way of entertainment for a very long time, except of course last year’s Zoom quizzes, which after about two attempts, I ditched. Even in the darkest of times those Zoom quizzes proved that people need to have fun, connection and, yep here’s that word again – entertainment. Zoom isn’t ‘real’ thought is it?, Zoom isn’t about atmosphere, stage-smoke and audience participation, and… a STANDING OVATION – which is what the cast of Wonderville received at the end of the show. The applause was deafening, the audience all smiling and the acts on stage beaming from ear-to-ear.

This morning, I asked both my girls what they thought of the show:

Ivy: “It was the best thing I’ve ever seen and my favourite was Edward the magic man!”

Nancy: “I saw a tiktok star and cool looking people and the people on stage were AMAZING!”

5 stars from both I think.

I urge you to seek this show out, to take your bestie, your kids, your mum or dad and indulge in some magic. You will leave the show with a feeling of amazement and this question in your head “how DID she/he do that?”.

Wonderville is at the Palace Theatre, London until 30th August 2021. Book your ticket using this link; https://www.wondervilleuk.com/

IT WAS JUST MAGICAL!

This is an independent review by Lucy Baker.

Lucy Baker is founder of Geriatric Mum blog and mother of 3 children age 11, 9 and 3. She had her last baby at 43-years old hence starting this blog to enlighten and share stories about being a GM (awful term hey?). Based in Lincolnshire, Lucy works as a make-up artist and confidence coach helping women to feel confident inside and out. Check out her work website here: www.shecoachesconfidence.com