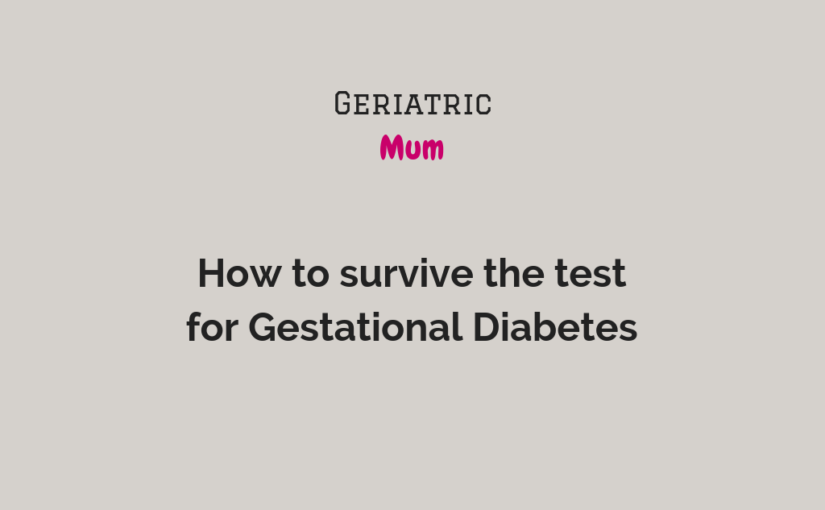 At my last scan at 32-weeks, my consultant, whom I really respect and trust, suggested that I go for a gestational diabetes (GD) test, mainly due to the fact that the baby has a larger abdominal circumference measurement in relation to the other measures they did at the growth scan. The babe was measuring on the 95th for the tummy, whereas the rest of the measures were on the 50th, or so. As a result, my consultant suggested I tested for GD, and I agreed. The test is an oral glucose tolerance test and it is done at the hospital.

My consultant gave me a sheet, you know the kind of sheets they give you from the NHS and the advice was very clear that I needed to fast from 10pm the night before the test and not to have a cuppa or any breakfast the morning of the test. NO CUP OF TEA! NOT A SINGLE DROP OF EARL GREY TEA – which is my favourite pregnancy crush at the moment – sob. I coped. Of course I coped, I have two lively children and I am pregnant with my third – one morning without a cuppa was a walk in the park in comparison.

After my crazy tea-less morning of herding the girls out of the door so that a friend could take them to school, I headed for the daycare unit at my local NHS hospital.

I arrived at 9:01am – for me that feels late and I hate being late! Actually, does that say anything about the baby and his due date? – no of course not. I have always hated being late and both girls popped out 10-days and 7-days over their due dates, so my hatred of tardiness obviously has no bearing on child birth.

After 40-mins of waiting at the day care unit, I had a finger prick test and a tube of blood taken. I don’t know about you but I am really squeamish and cannot look when I am having bloods. It sends me spinning. Whilst I was chatting to the nurse about the glucose procedure, I saw someone else’s tube of blood and it sent me a bit giddy – in fact, even typing this right now has sent me off again. If I could put my head down between my knees like they suggest if you are about to chuck a whitey, then I would! But I can’t. I am too pregnant for any kind of bending forward. After the slightly wobbly blood moment, I was given a very sweet drink in a plastic cup. The colour was a cross between bile and urine, but I drank the lot in 3 gulps and headed back to the waiting room to hang around for a long two hours whilst the drink and my body got to work. Just before I left the nurse, she explained that the baby will now have a party due to the high sugar I had just consumed – and she was not wrong! Kick, stab, bladder punch, jab, kick kick kick for the next long two hours.

I waited. I am a bit of a nosey parker (Geriatric Mum language if ever there was any!) so in addition to tapping out this blog post, I was having a good old look around. Out of the nine other people in the waiting room, two of which were men, seven of them were on their phone. One lady was playing a LOUD video, another was scrolling scrolling scrolling at a furious pace and stopping at cat videos on facebook. One lady was talking loudly to her mother in law (I worked it out) and slagging off her other half for being stubborn. It was like an episode of Eastenders in there and I have to say, I was enjoying it! Oh and another lady kept putting her phone into her bag, hearing it ping, grabbing it out, putting it back in the bag, hearing it ping, grabbing it out – on repeat. Crumbs I am nosey.

I had to wait two hours until the follow up blood test. It really is a long two hours. I wasn’t allowed to leave the hospital or go shopping – it said so on the leaflet. In fact, that really made me chuckle – is that what people do? Go shopping in between a hospital procedure?

If you are going in for a GD test, you might want to consider the following 8 points. They are things that I didn’t think about and a couple of them are tips that the ladies in my fab facebook group We are Geriatric Mums suggested for me.

Two days after the test, I called the daycare unit to get my results. I was told that my results were Normal – which was a huge relief. That doesn’t mean I can go and live off sugar like there is no tomorrow, but it does mean that my body can handle sugar whilst pregnant, just as it does when I am not pregnant. Good news. It still doesn’t answer the questions of why my babies tummy is on the large side – I guess we will find out more at future scans and when he POPS out!

Do join over 600 women in the facebook group I mentioned above, it is fab; We are Geriatric Mums