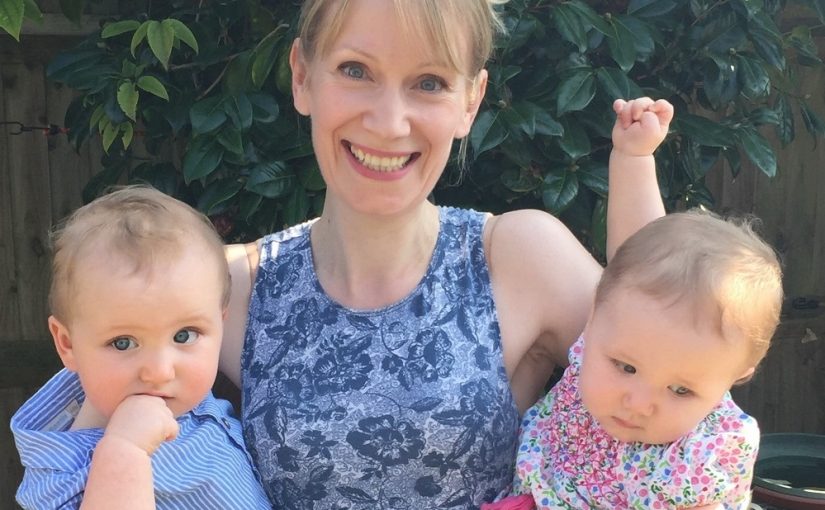 This post is about Linzi, a mum of twins. Despite living with illness, Linzi had healthy twins at 42 and in this interview she tells you what she faced and some of her experiences when she was pregnant and as an older mum. Over to you Linzi…

What is your full name? Linzi Meaden

What is your current age? 44

At what age did you have your first baby? 42

At what age did you have your last baby? 42

How did people react when you told them you were pregnant with your over 40 baby? Well my parents were floored! They never thought they would be grandparents and so it was the best news ever for them, and others were hugely excited and happy for us. Only a couple of people suggested it would be harder work and that they are glad they now have teenagers, not babies!

Were you offered any memorable words of wisdom when you spoke to others (friends, family, midwife, doc) about your pregnancy? Not really. Because I was expecting twins my family and friends couldn’t relate, so understandably no advice was offered. My midwife, doctors and consultant all said that it would be tough at my age!

Describe how it felt to be an older (geriatric) mum? For me, it felt the right age. I wasn’t ready in my twenties and was too ill with Crohn’s disease in my thirties. Being 40-something meant I no longer cared what others thought, too. I can remember saying, when I was 30-something, that I never wanted to be an older mum! Oops! I’ll admit that I’m exhausted with having twins and chronic illness too, but I can’t actually put into words just how blessed and lucky I feel to finally be a mum… a mother! It is love at a completely new level and I highly recommend it.

Is your child in school yet? and if so, how do the other mums and teachers react?No, they are only little.

And below, Linzi has written some more about her experience of pregnancy, birth, babies and more. It is a lovely story and amazing what the human body can do even when faced with the struggles of illness.

From the age of 27 I was in and out of hospital having been diagnosed with Crohn’s disease, associated arthritis and osteoporosis – an illness normally reserved for post-menopausal women. As a result, dating was off the cards whilst I focused on my health and holding down a career in HR.

Fast forward to 2007, I was 32 and I decided to go speed-dating with a friend on the eve of St Valentines Day. That night I met my now husband, who also happens to be an amazing hypnotist – am I still under his hypnotic spell I wonder?!! Ha ha!  On our first official date he told me he had 2 boys from a previous relationship (not married).  They were 6 and 4-years old and looked super cute in the photograph, we didn’t have Smart phones back then!

A few years later, he proposed on my birthday in 2011, which was also the eve of the Royal Wedding (Kate & William), and we planned to marry in 2012.  However, in November 2011 I decided to start looking at venues and found a beautiful country house with a last-minute date available – it was just 4 and a half weeks away and we we went for it.  Several family members asked if I was pregnant, I wasn’t, and we got married on 20 December 2011. It was a fabulous Christmas wedding.

My husband and I set up our own business together and had plans to relocate to LA, with a therapy clinic in Beverly Hills.  We were rushed off our feet with business, travelling and making plans and the years just flew by without us realising how much older we were getting.

In February 2016 I visited my Chiropractor and realising I was ‘late’ I popped to the chemist to get the magic stick.  When I got home, I tested straight away and yep, I was pregnant – it took seconds to show the positive reading.  We were both absolutely over the moon, yet a little bit apprehensive about being ‘older parents’ – my husband was almost 49 and I was 42.

After speaking to midwife, I was referred to the hospital for a 9-week scan.  Thinking it would be a general check, I said to my husband he didn’t have to come along as the 12-week scan wasn’t far away.  To my total amazement, the sonographer turned the screen towards me and voiced “here’s one healthy heartbeat and look, here’s another… you’re expecting two babies”. Well, that floored me!  I could not believe it and I burst into tears. Part of me wished that I hadn’t said to my husband he didn’t need to be there, I would love to have seen his face.  Anyway, that evening, I left a bottle of brandy with the scan pictures in the kitchen for him to see when he got home.  When looking at the scan image, he thought that there was just one baby and only when I told him to look carefully it clicked that there was two. The brandy was most definitely needed!

I suffered with bad morning sickness, so had to stop seeing clients.  We managed a last holiday away to Spain before our new arrivals, so that I could top up my Vitamin D levels and I even got a last round of golf in back home in the UK when I was about 6 months pregnant – that was fun!

We joined an NCT group and had our first local group meet up in September 2016.  There was another mummy expecting twins who I’d met at the local TAMBA meet up in May of that year, so it was good to be able to share the experience of expecting twins.  We were super lucky in that our group of 8 couples (expecting 2 sets of twins and 6 singletons) everyone was friendly and fun.  The youngest parent (mum) was 27 and the eldest, well yes, that was us!  The majority being 30 somethings.  We set up a whatsapp group and we’ve messaged every single day since.  We all regularly meet up, with and without the children, and I can’t imagine life without them – each and every one of them is amazing and I’m proud to be able to call them our friends for life.

Fast forward to the birth itself. We opted for caesarean section based on medical advice.  I had no idea what to expect. We were advised that the twins were to be born no later than 38 weeks and we chose 31 October (Halloween) to give birth to our little witch and wizard, which was 37 weeks and 3 days.  The pregnancy itself went really well, apart from the morning sickness. I was lucky because growing 2 or more babies, being geriatric (!) and having a chronic illness on medication could have gone against me, but it didn’t. Even the C-section was a breeze with the relaxing sound of Il Divo playing in the theatre.  Shortly after the birth, I started to feel pretty damn awful, despite being dosed up on morphine, but I couldn’t feel awful because two hungry little mouths and squinty little eyes were looking up at me wanting food and comfort.

From that moment, my life changed, and it’s been the best most amazing time ever.  I still can’t quite get my head around the fact that I am over 40 and I gave birth to 2 babies at the same time.  Yes! I’m exhausted, but that just says to be me that I’m doing something right. 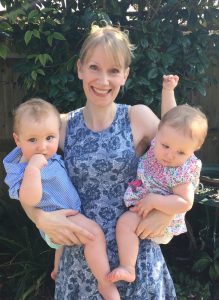 Thanks to Linzi for sharing her story on geriatric mum. Do make sure you are following geriatric mum on social media, links below: